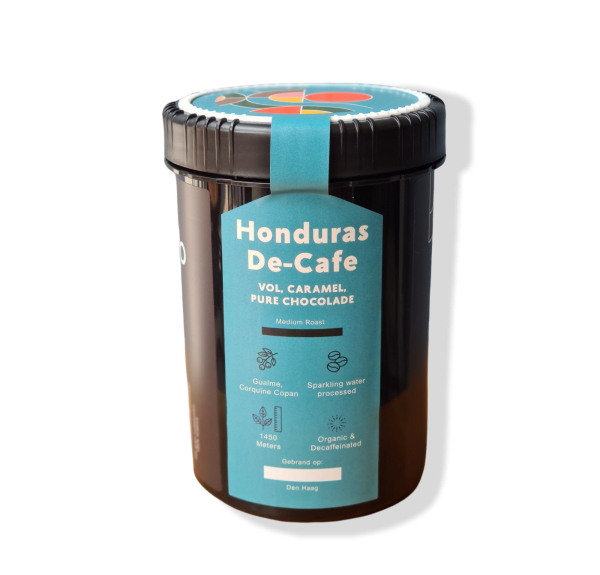 This washed coffee comes from producers situated in the Gualme area of Corquin, Copan.
Gualme is a relatively high altitude area with temperature swings and high humidity.
This means the coffee produced in this area has good acidity and complexity, but it is a
challenging environment to dry coffee. Producers in this area deliver their coffee to a
centralised drying facility that Falcon implemented this year, in collaboration with the
Aruco cooperative. By accessing this drying facility, we are able to reproduce stable
conditions which are much more suited to drying coffee, and so give the best chance
for these coffees to shine.

SPARKLING WATER DECAFFEINATION PROCESS
This process was first discovered by a scientist called Kurt Zosel at the Max Planck Institute
for Coal Research in 1967 as he was looking at new ways of separating mixtures of
substances. In 1988, a German decaffeination company called CR3 developed this process
for decaffeination whereby natural carbon dioxide (which comes from prehistoric underground
lakes) is combined with water to create ‘sub-critical’ conditions which creates a
highly solvent substance for caffeine in coffee. It is a gentle, natural and organically certified
process and the good caffeine selectivity of the carbon dioxide guarantees a high retention
level of other coffee components which contribute to taste and aroma.
The process is outlined below:

1. The green beans enter a ‘pre-treatment’ vessel where they are cleaned and moistened
with water before being brought into contact with pressurised liquid carbon dioxide. When
the green coffee beans absorb the water, they expand and the pores are opened resulting
in the caffeine molecules becoming mobile.

2. After the water has been added, the beans are then brought into contact with the pressurised
liquid carbon dioxide which combines with the water to essentially form sparkling
water. The carbon dioxide circulates through the beans and acts like a magnet, drawing out
the mobile caffeine molecules.

3. The sparkling water then enters an evaporator which precipitates the caffeine rich carbon
dioxide out of the water. The now caffeine free water is pumped back into the vessel for a
new cycle.

4. This cycle is repeated until the required residual caffeine level is reached. Once this has
happened, the circulation of carbon dioxide is stopped and the green beans are discharged
into a drier.

5. The decaffeinated coffee is then gently dried until it reaches its original moisture content,
after which it is ready for roasting.